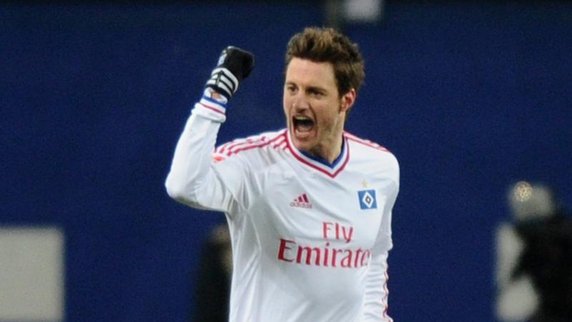 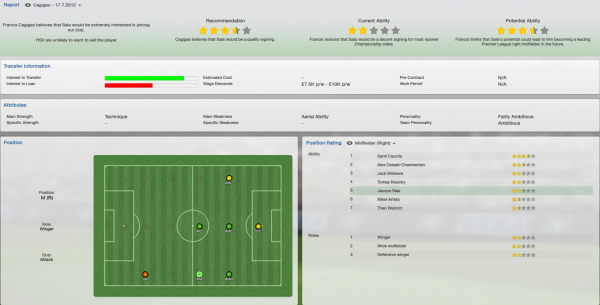 This FM 2013 player profile of Jacopo Sala shows a solid and versatile right midfielder with good all-around attributes. He was at Chelsea for a few seasons as a kid, then was sold to Hamburg and that’s where you find him at the start of the game. They are willing to sell him for 7 million pounds and it’s a fairly good price I reckon considering his potential.

His development in my test save was ruined by Tottenham, they bought him for just over 10 million but then left him on the bench for the best part of two seasons, so I guess he might develop into something better than the screen shot shows. He then moved to Espanyol and managed a great last season there, bagging 12 goals.

Do a screen shot of Schrijvers please! You have to include Belgum incyour database and he’s not that known, but imo the best young striker in the game!

We don’t scout with Belgium loaded in the database so not possible I’m afraid. This is for a reason, most gamers just wouldn’t load that country and seeing a great player they can not get hold of would frustrate them.

Righto, thanks anyways! I recomend signing him anyways, in the start you can get him for about 625m £! 15 years old with great stats aswell 15 finishing, 12 first touch, 13 dribbling and brilliant mental stats for a 15 y/o.

Also I want to give you guys some cred for doing this! This is IMO the reason footballmanagerstory is better than any other fm page!

Thanks for the compliment, much appreciated.

Can you tell me how Marco Rojas, from New Zealand (starts at Melbourne Victory) develops?

He isn’t available in my game.