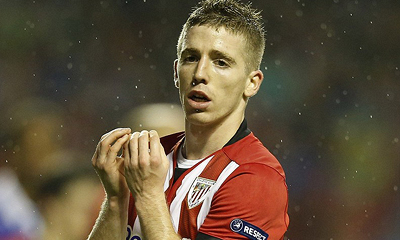 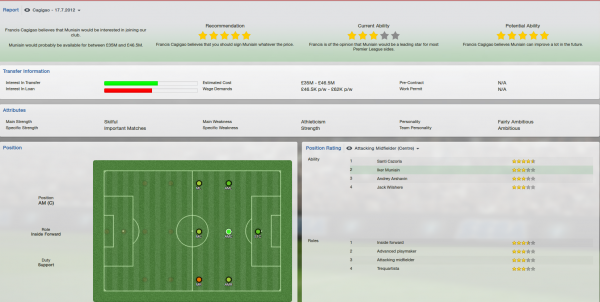 This FM 2013 player profile of Iker Muniain shows one of the best young players in FM 13 and his steady progress until the year 2019. At the beginning of the game he’s only 19 years old but his talent would make him slot right into any team in the world. The only thing that he doesn’t have is strength but apart from that this wonderkid has all the necessary attributes to be a huge star. Unfortunately his club, Athletic Bilbao, are unwilling to let him go, and I can’t really blame them. They want no less than 39 million for him at the start of the game and there is no indication that they might settle for a lower price in the next seasons.

In fact, he remained at Bilbao until 2019 in my save, which probably shows that they didn’t agree to a lower asking price in future seasons. However, I would pay as much as that for him. If you look at his future profile you will be impressed by his amazing flair, dribbling, technique and off the ball movement while his speed is also very good. He would be a great inside forward in any team in the world but he can also cover the attacking midfielder, advanced playmaker and trequartista roles.

Not all at once but we’ll try to have a look at those.

Great work so far, would you be able to do a profile on marco verratti (psg)? Keep up the good work

We probably will but he’s not a priority since you can’t sign him at the beginning of the game since he has just joined PSG.

Thanks for the reply, hes available for around 14m in my save so would love to see a profile to see if its worthwhile. cheers.

In my save , i tapped him up and he didnt sign a new contract, really good player but 10/10 is very generous as hes not in neymars class

Yeah, Neymar would probably deserve a 10+. But you can’t compare everybody to Neymar or Messi, those lads are unique.

As people have said the only way your going to get this kid at a good price is to unsettle him, his talent is unquestionable though.

could you see if inigo martinez the CB from real sociedad is worth getting.they wont sell for less than 47 million in my save

We do have a profile of Martinez, check the player index. He’s definitely worth buying.

on my save game he move to PSG in 2016 on free transfer,,too bad my scout didn’t find him,,

sorry for my english

You should sack that scout :)

are you going to do Souleymane Coulibaly? if so I could give you a picture of him in my future save

He doesn’t look too good in my game to be honest.

Thank you Johnny for this one, he has been amazing in my Newcastle save. I really mean amazing! :D

splashed the cash on him in my Liverpool save (£41m release clause), he’s struggling to make an impact as left inside forward unfortunately..

Playing as Aston Villa, into my third season and he has signed a pre-contract with me instead of Real Madrid! Very surprised he agreed my contract offer over Madrids

Can not wait to see what he does next season!

That’s quite a coup, “stealing” him from Real Madrid :) I’m sure he will do well.

does he play better as an inside forward or a poacher?

Shocked I got him on a free in 2016. Insane pickup. Been rotating him and Deulofeu. Very similar players. Both are amazing dribblers. They dribble past guys for fun.

Getting this lad for free is unbelievable, well done!