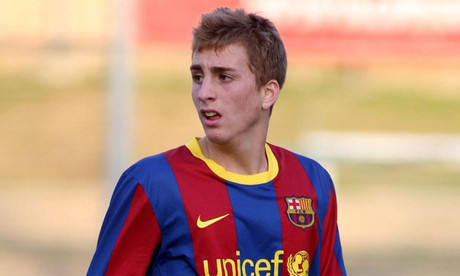 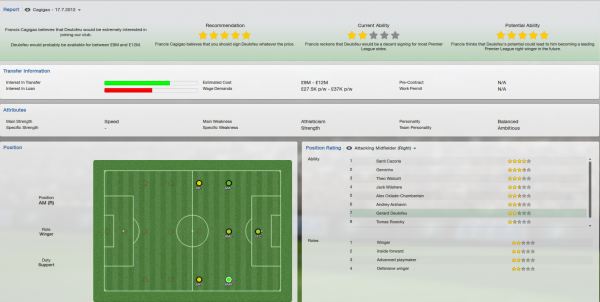 This FM 2013 player profile of Gerard Deulofeu shows another great prospect from the Barcelona academy, a winger that could grow into one of the best players in the world. As you can see from the scout report his potential is immense and he could line up for most top-flight European sides at the age of 18. His main flaw is that he is quite fragile, he tends to get injured quite often in one of my saves, but that doesn’t take away his amazing flair and technique.

You can get him for a reasonable amount at the start of the game, 10 million pounds, but if you do buy him you should play him as often as possible. In the test save Barcelona didn’t do that, he was kept on the bench and his progress suffered as a result. In fact, his profile in 2015 in my Barcelona story save seems better than this one in 2019, the main difference being that I gave him the occasion to play as often as possible. In my view he’s worth the 10 million but you will have to be patient with him and play him in the first team as much as possible.

Amazing player, scored like every game that I have put him in :) You barca tactic is amazing btw :) How did alexis Sanchez play for you at barca? For me he has played 23 matches got 17 goals and 22 assists :O

I only kept Alexis for one season due to the rules I have set for my story (selling all the stars and replacing them with young players).

I have read it all just couldn’t remember what you did with him :) How did he play?

Decent I guess, but Messi stole the show that season with over 50 goals.

That’s weird Sanchez has been absolutely amazing for me and messi hasn’t been great atall. What role did you play messi as? :)

Kk thanks mate, will try that :)

Great player. I picked him up(along with Bartra) on free transfers in summer 2014. Deulofeu is constantly improving, and also Bartra is excellent at DC as a ball-playing defender.

Good captures for you.

Not enough in my test save, at least compared to his apparent potential.

Not good in my test save, ends up in the Championship in 2019.