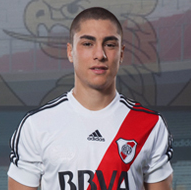 This FM 2013 player profile of Ezequiel Cirigliano shows a true all rounder. Cirigliano can tackle, link up and even create chances for himself. With great passing, technique, tackling, dribbling and first touch you could say he has a weird mixture of skills. But all this makes for a deadly maestro.

The screenshots were provided by Wayne Boon, an FMS reader, he has done a fantastic job with this kid. Wayne focused the individual training on an ‘advanced playmaker’ role which has worked wonders and offered consistent first team football. Physically sound, mentally superior and the most outrageous range of ability I’ve seen makes this kid a must buy, and the price tag can be as low as £3 million. I could only offer Cirigliano a 9.5/10 due to his flexible ability, he might not always have the PA Wayne has enjoyed, but he will always be an excellent player all the same.

Only downside is the negative PA, gonna look at my 2017 save to see how he has devoloped ;)

I don’t see that flexible PA as too much of a negative seen as its quite high anyway.

Sometimes it fucking awesome and sometimes it’s bad. Quite a gamble :S

Yeah it can be, but in my experience Cirigliano is usually a good bet due to his well spread attributes anyway, but as you said, its always a bit of a toss up when someone has flexible PA.

@Bubba what skin is that? looks sweet :D

How well does Hervin Ongenda progress?

He looks very talented but not developed enough in my saves yet, though he may need a coupe more years in those so we’ll see.

If you can hang on until January 2014, you can sign him on a pre-contract deal.

Turns into one of the best playmakers by 2016, I built my Elche side around him.

He is great, unfortunately he was always snapped up before 2014 by another club in my save.

Would he team up well with ravel Morrison? I just bought Morrison before discovering your web, I’m now considering getting this guy

I really don’t know, there’s only one way to find out and that is play them together which I’ve never done.

can you do a review on morrison as well?

He just isn’t good enough in any of my saves I’m afraid.

Do you think who is better between him and Crisetig

Both are too different in my opinion, it depends on what you want to use them for.

Crisetig for the ball winning role but Cirigliano for CM-support.

Hello Darren, iam using your fluid tactic with Napoli. I have
Isco as the AP in the centre and Hamsik as the CM support who is molesting defenses week in and week out. I am looking for someone to fill the CM defend slot, do you reckon this fella can fill the role to complete the trio or would he be wasted? Cheers in advance dude

I certainly don’t see why not, worth a try at least.

Hi Darren,
In your opinion who would you have as MC-BWM;
Cirigliano or Schneiderlin?

He is better than this on my save. i have him with dortmund in 2018 and he is ripping teams apart with his all round attributes. his flexibility is his greates strength to be honest.

If he is better in your save I’d like to see a screenshot, as I think he’s very impressive in the ones above so he must be immense in yours.

Do you think he would work as a DM-Support?

I should imagine so but I haven’t tested him there so you’d have to try.

Darren, can you take a look at Jadson from Botafogo??? the kid has just turned 19 and is one of the most promising defensive midfielders from Brazil… I think he definitely deserves a profile!

While he does look good he was a very poor trainer for me and as a result developed little.

Hey Darren, are there any other Central Defenders that I could buy on the cheap as Vidić and Ferdinand are getting really old and need replacing with someone who’s got bags of potential?

If you have already exhausted all the options in our lists then maybe try Umtiti too, remember we don’t know your game so can’t say who will be cheap months into the save.

I don’t see why not, you won’t be taking advantage of his strengths and versatility but he could do the role.