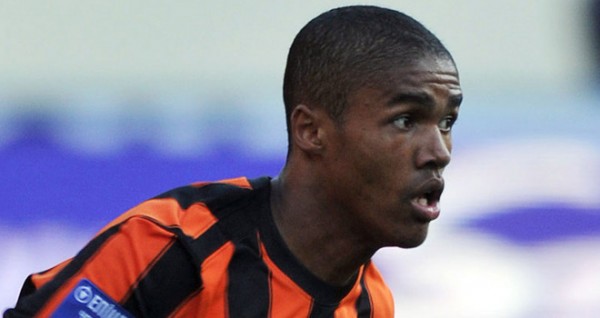 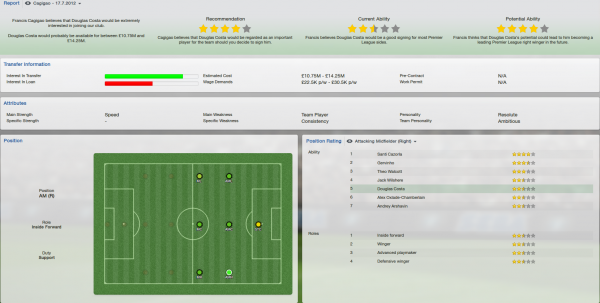 This FM 2013 player profile of Douglas Costa shows an incredibly versatile midfielder and his progress until the year 2019. Douglas Costa’s main role is that of a right winger (inside forward, winger, advanced playmaker) but you can employ him in almost any position in midfield thanks to his skills. At the start of the game he’s just 21 years old and already good enough to slot into any top-flight side in the world. Moreover, his wage demands are quite low but the asking price is ludicrous during that first season, 25 million pounds is too much.

In my test save he ended up at FC Porto who chose to splash 16 million on him. The return in terms of goals, assists and average ratings made it well worth that sum though. His future profile shows a player with decent speed, exquisite mental attributes (especially flair), amazing technique and dribbling plus very good attributes for long shots and set pieces. Bottom line: his skills and versatility make this lad a great choice for a reasonable price.

Just needed bit of pace and first touch then he would be unstoppable.

Those can be improved through training if you get him right away.

There is a mistake in the article it says “Christian Eriksen career history until 2019” :)

Corrected, thanks for the heads up.

Just letting you know it says Christian Eriksen career history in the profile :) Quality player though :)

Ignore me the post from the guy wasnt there when I saw it :P

Already taken care of that mistake.

I am not a fan of his unfortunately. To low teamwork players like him for every chance he creates another 3 could of been if he just picked a pass. And I know you will say train his preferred moves to be look for pass rather than shot. But he’s just not for me. Great work though guys ;-)

Yeah, I also prefer team players but you have to admire his skills.

I disagree with you jake. I bought him in my 2nd year at liverpool for around the same price as listed above (he was on the TM) and he has been gold for me.

Specifically in the 3rd season, he had 8 goals and 25 assists alone and an average rating that was considerably high.

Agreed, takes too many long shots for my liking however he can be devastating when taking on players.
He does have a tendency to score some unbelievable goals from my experience.
Form is very on and off reminds me of Nani and the profile does not do him any favours – can be developed a lot better.

What do you think to Andre Schurrle ?

Great potential, unfortunately hasn’t developed much in any of my test saves.