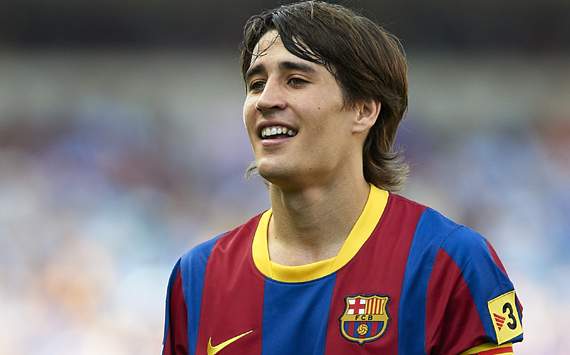 This FM 2013 player profile of Bojan shows one of the most famous youngsters in the game and his pretty good future profile. He was supposed to be Barcelona’s next sensation but between injuries and loan deals he was unable to really step into the spotlight at Camp Nou in real life. As you can see from the scout report his potential is great and his future profile does confirm that. He has great technique, almost perfect off the ball movement and excellent flair, speed and agility. Overall he turns into a top class striker, one that should score and create plenty of goals for any team.

Unfortunately you won’t be able to buy him right away in FM 13 as he’s on loan at AC Milan but my suggestion is to try snapping him up right after that deal ends. In my test save Barcelona didn’t give him any chances to play after returning from loan, he was sent to the B team and that’s where he was left to rot until moving to Sevilla on a free transfer. The numbers in his career history are not great but I’m sure a decent human manager could bring out the best in this kid.

I thought Bojan was on loan from Roma.

Yeah, it’s a farily complicated ownership situation. In my FM 13 save he ends up back at Barcelona at the end of the 2012-2013 season (there is some clause in his contract as far as I know), so that’s why I listed Barcelona as his club.

I thought it was just a deal similar to the Romeu deal with Chelsea. But it looks more complicated than just a buy back deal.

Yeah, seems so. I’m managing Barca in FM 13 and he came back at the club automatically in July 2013.

Im managing Barca like you, do you think that I should keep him when he comes back or sell him? :)

Keep him, but only if you can give him enough game time.

Sounds good :) I will sell him if I buy Rodrigo , then maher/isco which is who I wanna get :D

The board just suddenly gave me £60m so I bought Maher, Rodrigo, Ademilson, Ter Stagen and Alaba :D