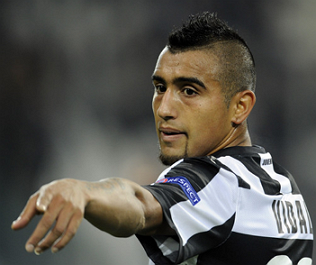 This FM 2013 Player Profile of Arturo Vidal oozes class. This lad has everything, he’s mental solid, very strong and agile to mention those technical attributes. One of those players you’d want defending in front of a back four as much as making it happen in the final third. The only downside is the asking price of £35 million for a 25 year old that won’t offer a long term solution like some of the wonderkids we profile, but he had to be profiled and warrants a 9/10.

He looks absolutely quality :) Btw it says Arturo Vidal profile aged (Enter his age from your future screenshot here) in the year 2017 in the profile which should just say his age :)

Corrected, thanks for the heads up.

Thanks for sorting that, just got back from work :)

Are you kidding me?

Sorry a bit lost on this one, what was that with reference too?

What role would be best for him BWM, CM or BBM to play along with Xabi Alonso.

Depends on your tactic really and what you want from him along with other roles within the team. But I think he’s offer something special as a BBM.

ive got him in my chelsea save and hes awesome.only draw back is if you play him as a bwm he tends to pick up alot of bookings over the course of a season reguardless of how you set him up in his marking and tackling

Yeah I guess he’s a little like Tiote in that respect. :)

Kind of an obvious player, shouldn’t we profile Messi also?

I like Vidal, one of the best DMC in the game, but he’s already a superstar.

Exactly why I wasn’t going to profile him, but then we had the odd groans about him not been here so I succumbed to the reader demand, can’t win I guess.

Why dont you profile Nael Maupay he becomes a beast when his 17 years old.

Never heard of him, are you sure he’s not a regen.

Neal Maupay plays for OGC Nice in ligue 1, you can get for about 3 million at the start of the game.

I see, you must need the france loaded or a custom database setting then, judging by him not been in my saves.

Unless I’m missing something, you haven’t profiled Julian Draxler of Sxhalke yet. Get on that

Nevermind, found him. Keep up the good work.

his nationality is “chilean”, not “chilian”. Quite good player btw, I bought him for Arsenal and makes an excellent midfield work with Arteta.

Typing error there which I’ve corrected.

Im having problems with his role at the moment, DLP BWM or BBM ? What do u think Darren?

The role needs to be based around your tactic more than the player, use the role that best suits your system.