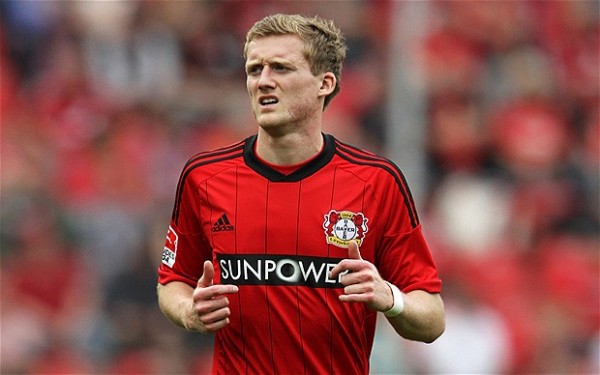 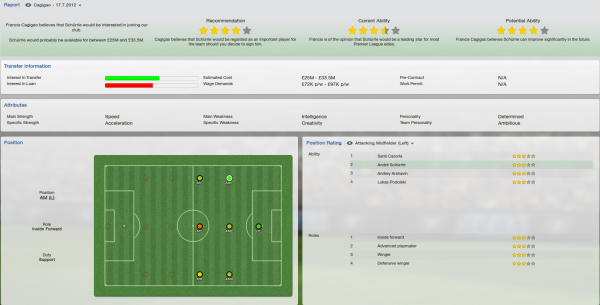 This FM 2013 player profile of Andre Schurrle shows one of the best left wingers in the game, a player with amazing speed and stamina and solid mental attributes at just 21 years of age. However, Leverkusen want no less than 27.5 million for him at the start of the game and that is a bit too much if you ask me, especially because his not so bright technical attributes. Those can be developed though and did improve in my test save, even though Schurrle remained at Leverkusen until 2019. His future profile shows an almost flawless inside forward, with great speed, decent technique and very good mental attributes (except creativity). I still think that the initial asking price is a bit too steep though.

He looks great but there are two roles for hm. A quick poacher but he needs better composure. Or and inside forward but his technical are not so great. German talents are so good. All because of the youth systems in the Bundesliga. England could learn a thing or two from them. Also, when are you going to start writing your Barca story again.

About the story, when I will have the time to play that save. Probably by the end of this month if things go well.

Thnx for the profile.Quick question, Marco Reus or Andre Shurrle for LW in my man utd save.

Hi was revisiting an old save and noticed schurrle has a preferred option to play for chelsea other than making him easier to sign do you think it would have an affect on his performances?

Shouldn’t have anything to do with his performances.

He is a piece of crap in my Nottingham Forest team, i bought him for 22.5mil and managed to convince him to join me after my first season in the top flight finished 7th.

Play him as an Inside Forward on the left wing, all he ever does is pass the ball straight to the opposition, difficult having motivation with my Batth being the captain, his dribbling skill is not bad, though the end product is lacking, always try to cut inside and shoot, I don’t have a problem with him cutting in, but the shooting accuracy is ridiculous.

Will now try to see if there are any idiots out there willing to pay for him.

1. Plenty of people had great performances from him. I signed him too in one of my saves and he did very well.
2. Calling people idiots is not something we like around here.

Apologize for the misunderstanding

Not saying people who are willig to pay for him are idiots, I was trying to say that I am trying to flog him off my team, and see who is the ‘idiot’ willing to take him.

Dortmund actually was willing to pay 23.5mil in installments for him so I sold him to them.