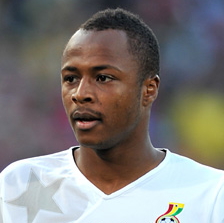 This FM 2013 Player Profile of Andre Ayew shows an extremely versatile player who can adjust his attributes to your vision. The future screenshot above may seem a little weird and at first glance you’ll notice his physical attributes have dropped, but that isn’t bad, Marseille wanted to use Ayew as an MC, so they adapted him to play such a role. The massive increase to his passing and mental attributes show that is the case.

You could just as easily develop Ayew into an AML and see the relevant attributes sore for that position. This kid is truly one of kind, and probably the only one who could be one of the best around in any of two positions. Add to that the asking price of £15.75 million and you have yourself a 9/10 son, well done.

Great stats for a box2box midfielder although I’d prefer Garmash in that position. Excellent mentals though.

Garmash is good but I would pick Ayew myself, I just feel like he has more power, but everyone picks out different attributes as been key.

I always liked Andre, glad to see this edition gives him justice. He may not be ridiculously fast or technical but the combination of the attributes make him one of the best left midfielder or a box-to-box type of player around. And the price is very reasonable as well.

He is a great player and does actually have great speed but he loses it when you focus heavily on other areas of his game, so it all depends on how you want him to grow, as a winger or MC.

Yes he could do that role, though Isco and Maher also do a great job there.

Isco and Maher are a little bit more expensive. I will go for Herrera or Ayew but it’s hard to decide what do you think

I’d go with Herrera purely for the creativity and magic he can create, but I feel like Ayew would be more solid.

Did you take a look at Oliver ??
Do u think Willian can do better than Herrera

Yeah but he’s not developed in my saves. I’d go for Herrera over Willian due to age and PA.

Did you take a look at Oliver ??
Do u think Willian or Garmash can do better than Herrera

Same as above, Garmash again is a different type of player.

Bought to my LFC team in 2nd season and from the start he’s an absolute beast. Playing as DLP in CM position. Just getting a lot of yellows but other than that…scores, assists, dribbles ..top quality.

He is class and I think the discipline is to be expected, its just the sort of player he is.

Thank you Darren for the tips, they have been really helpful. Have a question for you… I am in my second season with Soton and ended up with loads of players in the MC position having Schneiderlin, Cork, Anderson, Cirigliano, Crisetig (will be sent on loan), Ayew, and Yttergard. I need desperately too offload players but I dont know who. Thanks :)

Depends on your tactic and which players will attract interest really, but for me if I were losing any of em’ it would be Cork and Anderson.

Darren’s opening sentence says it all – “extremely versatile player who can adjust his attributes to your vision”.
On my current save his creativity is on 18 for instance and the overall attributes are spread into difference areas – have not seen such a variance with any other player.

From a positional perspective I think that Ayew is perfect for a manger that likes to play 2 players in the cm position (no dm/amc). This due to the fact that he can be very effective going forward with his passing, dribbling and overall physical skills whilst contributing on the defensive end. These ingredients can aid a team to nullify the 4 5 1 formations that outnumber you in midfield 9considering that you play him with a more defensive partner).

Furthermore he is a big game player and does score some amazing goals when he decides to take on 3-4 players. One of my favorite players on fm13 – described as “world class midfielder” on my current save and a bargain at the start of the game if you play with a bigger team.

Yeah I think that sums him up, he’s very energetic too so covering the ground of a missing MC can be achieved if the tactic is set right.

Thanks for this guy…i will retrain him to advanced striker.

I am really impressed by many positions he can play, so you can make a player to whatever you want!

He is certainly one of the most versatile players in FM13.

He is one of my favorites this year, especially if you need an ML instead of AML.