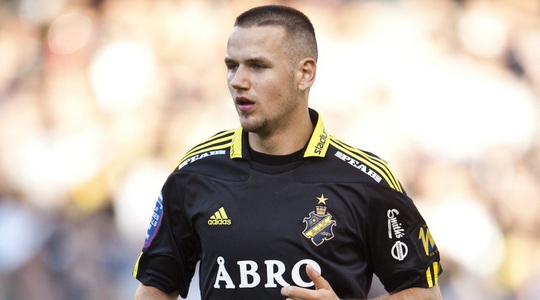 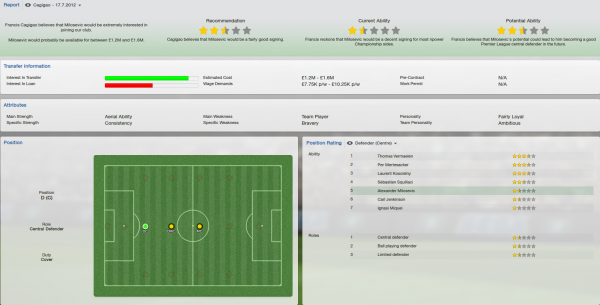 This FM 2013 player profile of Alexander Milosevic shows an incredible bargain, a player that you can get for just 1.3 million pounds at the start of the game. He ended up at Manchester United in my test save and I guess that says enough about his quality and development. It’s true that the Red Devils bought him as a backup option but he had three great seasons at Dortmund before making the move to the Premier League.

He developed into a complete defender, with decent speed, excellent strength, solid mental attributes and good defending skills as well, plus good passing and decent technique for a centre back. He is a must buy in my view, might become even better than the future screen shot above.

This player is as solid as they come. I had him in my Sweden squad when they won the European Championships and he was very, very good for me and to confirm suspicion, yes he can become better than above :)

Thanks, I was quite sure that he can be trained into an even better player.

Hey, just wanted to know, since you guys have been doing some profiles off cheap centre backs if Stefan Strandberg is in your to do list? He´s really cheap (750k+-) and rock solid. Plus he has pretty good attributes from the start. I don’t have a future profile since I haven’t played more than 2 seasons yet, but my profile of him 2 seasons in is pretty good.

Hi, i have Stefan Strandberg for my Man Utd save and he ace between 7/7.50 every game

He isn’t available in my save, probably you have the Norway league loaded?

No i don’t, if you wish I can post some screenshots here.

Have you done a profile of AS Roma’s Marquinhos? Seems like a great prospect and should develop into a very good CB.

He doesn’t become much in my game.

It’s a shame. I started my game with AS Roma. His stats are very good for a 18 year old and I hope to develop him into a world class CB. Don’t have too much time to play, but if I finally get to year 2018 or so, I’ll let you know how he turned out :D ;)

Just 13 in long shots, I guess they never looked at this match:
http://www.youtube.com/watch?v=1FdvSounBLA