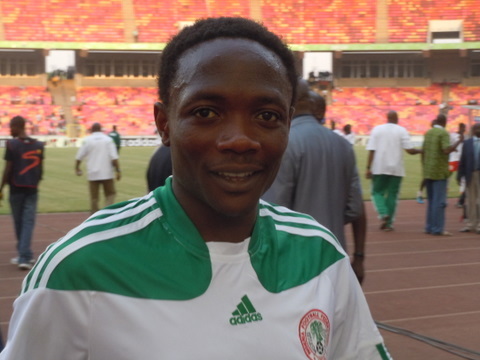 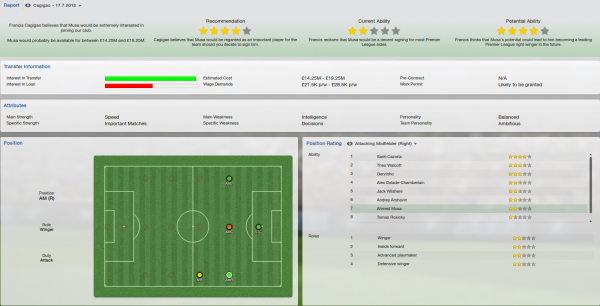 This FM 2013 player profile of Ahmed Musa shows a great African talent, he can become one of the quickest and most skillful wingers in the game. At the age of 19 he is already good enough to play in most top-flight teams, even though his mental attributes are not quite developed. He has amazing speed though and is also likely to get a work permit right away since he already plays in the Nigerian national team at such a young age.

His development in my test save was remarkable, not only he improved his mental attributes but he also made great progress on the technical side and became an excellent winger. In fact, Liverpool paid no less than 23.5 million pounds for him and he repaid The Reds with three solid seasons. Unfortunately CSKA Moscow want 15 million for him at the start of the game, quite a steep price, but since he can develop a lot I guess he’s worth the risk.

Thanks. I didn’t notice any difference between FM 12 and FM 13 regarding player development to be honest.

Are you going to do a profile of Ilkay Gundogan ? on my Dortmund save (2014) he’s 23 with 20 passing, 19 creativity, 17 Technique, 16 first touch & other good stats. He also got me 19 goals from Central Midfield this season, Neal Maupay is developing nicely aswell a real bargain for 1.3m in my team he has 17 finishing, 16 first touch & great mental stats all this at the age of 17. He got 27 goals for me this season in 27 starts. Anyway I enjoy this website & appreciate the work you guys are putting in to help people find real quality talent!

I apologize, I’ve just fount the Gundogan profile… my bad!

No problem at all. He is very good indeed, world class.

Zouma is 20 years old and and a rating of 2.5 stars for ability and 3.5 for potential by Rowley…

Zouma, the difference between the two isn’t worth 31 mil.

Do you reckon he would make a good inside forward on the AML slot?

Yes, he should do fine.