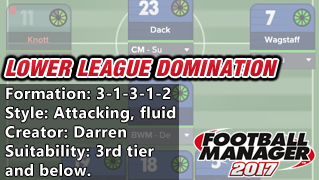 Hi guys and welcome to the first edition of our best FM 17 tactics series. If you struggle for stability in the lower leagues, desire high possession and enjoy dominating games then look no further. This FM 2017 tactics  is suitable for the lower leagues, specifically League One and below in England which Is where I tested to great success. Not your normal lower league formation I found great success using this shape. The three centre backs are solid and split to cover more width when necessary, the DMC breaks up play while the central midfielder gets involved with all phases of play. I deploy two defensive wingers to defend the flanks but also attack out wide and link up the play. The advanced playmaker is our key, he scores, assists and drops deep to collect the ball before driving forward. Both strikers link up well, the advanced forward is our main goal threat while the false nine pulls defenders out of position and makes late runs into the box.

This shape seems to work well against a multitude of formations and very well away from home. However, you may find it hard against narrow formation that defend quite deep. I didn’t want your stereotypical lower league approach of hit and hope Football. This tactic is based around ball retention, working opportunities and pressing the opposition into mistakes. The majority of my instructions match this ethos, I also ask my team to roam from their positions, this makes our movement more unpredictable.

Note I ask my players to get stuck in, you may need to reconsider this if yellow and red cards become an issue. This will vary on your team and opposition instructions. I didn’t have an issue personally. Note: For full effect download this tactic, do not try and copy it as there are specific player instructions which are important.

CD – central defender (defend) – typical central defenders as ever, tackling, positioning, strength and heading are key attributes, try and avoid slow centre backs as you can be in danger of the counter attack and passes over the top.

CD – central (cover) – Important attribute is acceleration and pace, this guy needs to clean up through passes and mistakes.

DM – ball winning midfielder (defend) – This guy will break up play and that is it. Passing is always nice but I think a physical, hard tackling DMC could be best.

MR/ML – defensive winger (support) – An all round winger would be ideal but left footed for the left and right for the right is best. Speed is helpful and the better their delivery the more you will score. Just beware, without decent work rate and the willingness to defend you may be exploited down the flanks.

MC – central midfielder (support) – This guy links up play, arrives late in the box and acts as your transition from phase to phase. An all rounder is best but favour more attacking over defending ability.

AMC – advanced playmaker (attack) – Here we have your main threat, this chap makes or breaks the tactic alongside your strikers. You need flair, vision, speed, dribbling and the better he can finish the more you’ll score.

ST – false nine (support) – A source for assists and goals, an all round striker is best but favour speed, dribbling ability and finishing.

ST – advanced forward (attack) – Pure and simple you need a goal machine, someone who will find the net. More specifically a player with good dribbling ability and physical stats especially speed are welcome. The image above shows our general shape while defending. The two wider centre backs split when in possession to add width but then tighten up once possession is lost. The middle DC drops deeper to cover any through balls. My DMC, MC and AMC cover the white shaded area, taking turns to close down depending on opposition positioning. The defensive wingers are very important, as you can see they sit fairly deep when not in possession, almost like wing backs. When we regain possession both wingers push on into the attacking phase as seen below. You can now gain an understanding for the importance of stamina and work rate in these two wide areas. The AMC gets into range and then picks out a pass or shifts into an area of space, hence the need for passing and general creativity. My false nine sits just deep of the advanced forward and acts as a pivot of sorts also arriving late in the box from crosses. There is a decent amount of movement and passing options against most opposition.

Here are my results with Gillingham in League One and cup competitions. Some good form all round really considering the team at our disposal. We were predicted to finish 12th, so top spot and the Checkatrade trophy represents a real over achievement. Just wanted to demonstrate how well we did in all areas. High possession, pass completion, shots on target and goals scored. Worth noting the foul count though, you may need to watch this adjust accordingly if needed. The stats above show how many players get involved and chip in with assists and goals. But the defenders, AMC and strikers are clearly vital in boosting those numbers.

2. Once the file is downloaded move it to the following folder documents>sports interactive>football manager 2017>tactics

Thanks for reading. Please feel free to leave a comment. Hope you enjoy :)

Sorry, I have reloaded the correct tactic.

No problem, just for your attention!

I agree with Philip – tactic linked to download is different to the one you discuss on this page. Any chance you can re-upload? Want to give it a go with Plymouth :)

Just sorted, sorry about that.

What about use this tactic with top clubs? Does not work or you didn’t try?

I haven’t really tested it, let me know if you do. I spent an age testing in Leagues one and two so didn’t have time for the top flight.

As you bold the fact that there are a lot of player specific instruction which you don’t discuss in the article, a correct download would be great. Thank

Thank you, atm trying it in a REALLY low league, hard to get decent players for some roles (DWs and mainly F9), but it seems to be working rather good. Not your level of good, but it’s decent, cheers!

Thats good hope it continues to work for you. And remember I tested with suitable players and bought to suit the tactic also…I’m sure your will get better as you find better players.

It worked, I’ve won Vanarama North as FC United with it. Thanks. Only thing I constantly had to do was specificaly tell the DWs to mark and close enemy wingers as the defense was very leaky against crosses from the corner areas.

Please do not use this formation. IT DOESN’T WORK! I GOT SMASHED!

Yes you are probably right Jim, if you use this ‘formation’ it won’t work…if however you actually download the full tactic, apply during pre-season, with the correct players, right approach to team talks and good general management it will work.

You should upload it to the workshop mate

We prefer that people get our downloads from here to be honest…that way the correct approach can be taught too.

Hey I want to try out this tactic as well, but I don’t have an pc or laptop atm since I’m traveling, just an iPad with the touch version so I can’t download the tactic, could you tell me the player instructions or do you know how to download it for the iPad?

It may not work the same on Ipad as that is a different version of the game.

The iPad version this year is actually the full FM Touch version, so it probably should work

This was made for the full, full version though, not the touch so as far as I was aware there are certain setting options missing.

My Sky shield won’t let me download this. Could attach it to an email for me please?

my email address is sneakglove@googlemail.com

It’s fantastic to see such a useful post. I also can be helpful here :) You will be surprised how easy it can be to fill forms. Try fillingl Connecticut Affidavit that Power of Attorney is in Full Force and Effect through the online sowtware https://goo.gl/8llhi2.

Hi mate, thanks A LOT for uploading this file. If you’re still active I have two questions.

So I downloaded your tactic because it mostly fits in with the players of the team I’m gonna use for my new career (Wrexham, Vanarama national)and my own signings.

I’ve used this formation in pre-season so far, and it gave me what I thought promising results (for example an 8-0 thrashing of a team just two leagues below (while I’m using the extended league system file), and an unlucky 1-0 loss against Wigan)

Now my questions are as follows:
1). So far Im using a deep lying forward instead of a false 9 because literally every striker at this level has a lot of trouble playing in the false 9 role. For now it does seem to work out allright. What is your view on this?
2). My best “central” midfielder is better suited in the box to box role than a standard CM. I still didnt change that role but I was wondering if you’ve tested the box to box role out in this formation.