We’ve all been there; you start out with your chosen team looking for a fresh challenge and then you end up signing the same players to fill the same holes in a different team.

To help you broaden your scouting network, I’ve highlighted five players to sign from the MLS to give your squad a fresh look. 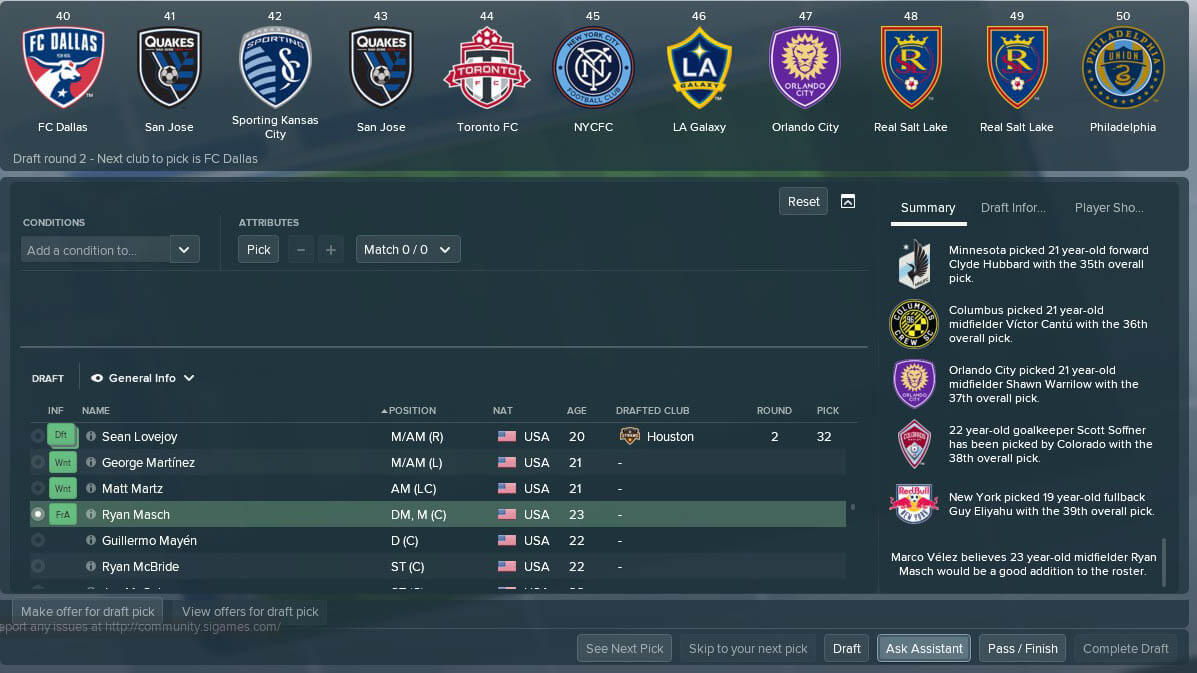 24-year-old Gonzalez should be on your list of keeper targets, particularly if an understudy with potential is required. The American keeper is valued at £1.7m but can be snapped up for well south of that. It will prove good business.

He does require some polishing, which can be achieved through targeted training and game time but he’s far from a poor keeper even at the start. He manages to keep hold of the ball well when fielding shots and crosses (13 handling) and he can produce moments of magic too to keep the opposition at bay (13 reflexes, 14 agility).

On the surface, Nashville midfielder McCarty, 32, might not look a splendid signing. I urge you to scratch deeper. His range of passing is by no means spectacular for a central midfield player but he still does a decent job in possession (14 passing) if you get the right players around him and he does have a knack of getting in the box too.

That’s not why he’s on our list though. No, that all comes down to the fact he would waltz through any personality test you could throw his way. If you need an organiser and a leader (16 determination, 16 leadership) then £1m McCarty is your man.

Ah Jonathan Dos Santos. The midfield dictator (16 first touch, 16 passing) is worth every penny of his £6m price tag regardless of the fact he’s already 29. The Mexican international can operate as a box-to-box midfielder or as a playmaker from a deeper position.

Either way, you won’t be disappointed. His off the ball game goes against him in a defensive sense but his never stop running attitude (16 work rate, 17 stamina) means he puts a shift in and in possession he can be the heartbeat of your team.

As value for money goes there are few defenders better priced than the £4m tag slapped on 26-year-old Long’s head. In the real world, Long was named the MLS defender of the year in 2018 and his stats make pretty good reading in FM20 too.

The right footed centre back is capable on the ball (passing 12) but excels in the more defensive scenarios with his reading of the game strong alongside the more obvious qualities associated with a central defender (heading 14, tackling 14, marking 13).

The final tick in the box for Long is his influence in the dressing room with leadership skills making him skipper material.

Finishing off our list is Josef Martinez, who Atlanta signed from Torino back in early 2017. He’s a goal scorer and every team need one of those. He’s valued at £6m but it will take nearer three times that to prize him from The Five Stripes’ grasp.

Most of the sport quizzes online about MLS will ask you about this man, who has beaten records and excelled at Atlanta. The Venezuelan can operate anywhere across the front three but is most effective utilised playing on the last defender where he can run in behind (speed 15, acceleration 16).

Martinez is more than just a striker with pace to burn though and he’s capable of beating defenders one-on-one (dribbling 14) and has the ability to tuck the chances that come his way into the net (finishing 16).

It’s a fairly hefty outlay for a man not proven in Europe but pair him with a target man and you’ll be banging in goals galore.

There you have it, five players from the MLS who could transform your next squad.