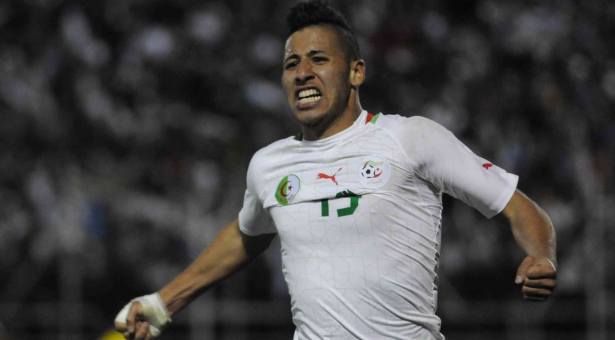 This FM 2014 player profile of Saphir Taider shows a sturdy central midfielder, a player that can both create and break up the opposition’s moves. In the good old Italian tradition he is co-owned by Inter and Bologna, so you will have to split 16 million between these two clubs to get him at the start of the game. The price might become lower later on but not by much.

In my test save PSG decided to buy him in the summer of 2014 but he failed to adapt to life in France and was sold to Everton after a couple of disappointing seasons in Paris. He adapted well to the Premier League though and delivered solid performances for the Toffees in three seasons. He developed solid technical skills along with very good tackling, good mental attributes on all fronts and a solid physical side. In my view he’s a good choice if you need a box-to-box midfielder.

Viva l’algerie! I promise, after this world cup, this guy’s PA will skyrocket. As will Ghoulam, Mahrez, Feghouli and Brahimi. Oh, as well as Nabil Bentaleb.

Yeah, I have watched the friendly against Romania last night, Algeria could have won it by a far bigger margin. They have a solid team, hope they will do well at the World Cup.