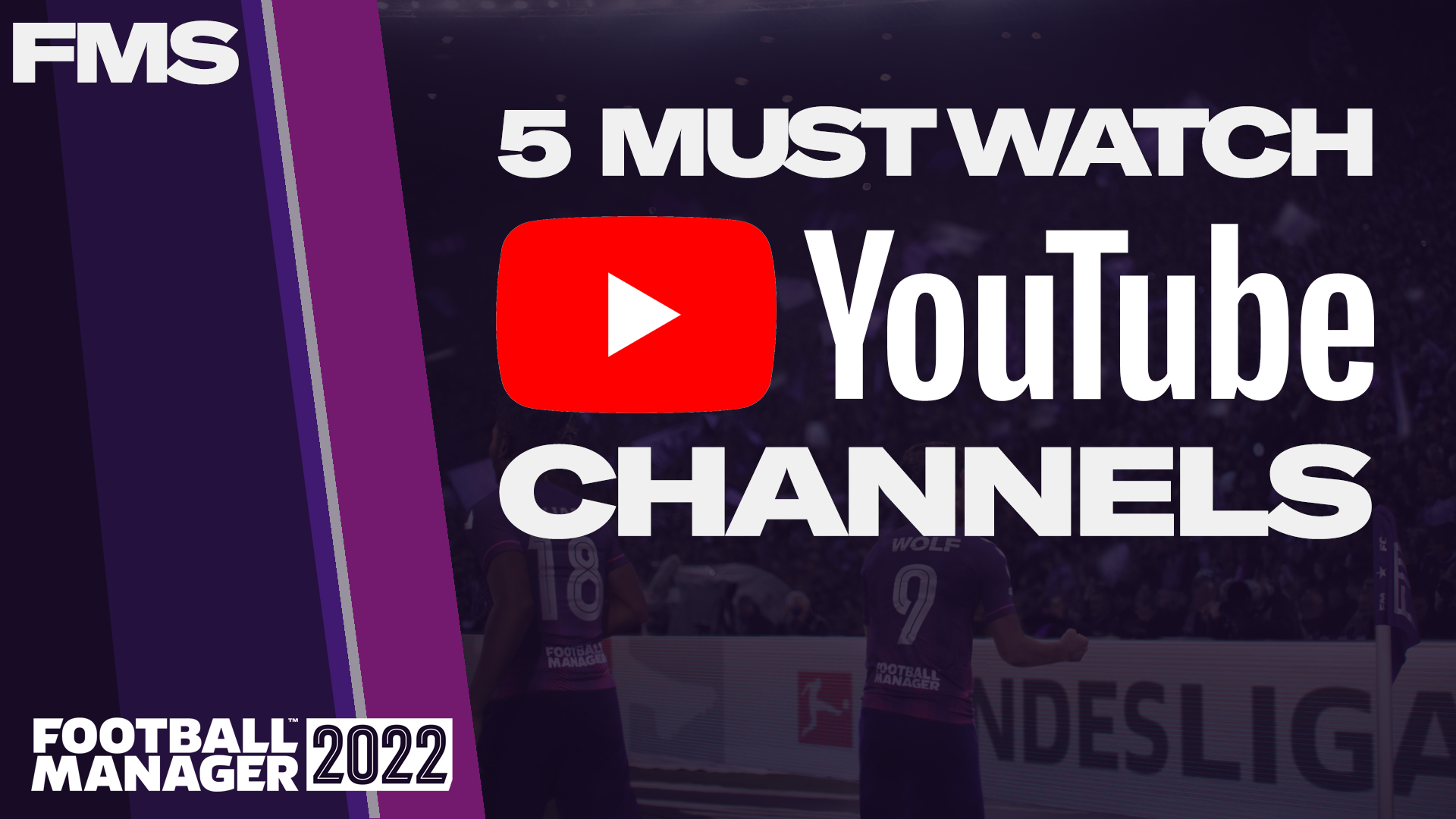 The first step is to dive two feet into playing Football Manager 2022, but while playing, why not fire up YouTube and indulge in some content videos. To help, we’ve put together a list of the Five Must Watch FM22 YouTube Channels.

Playing the game is like step one into your immersion into the FM community, then you start watch on YouTube, then perhaps, like me, you end up 40 years old with your own channel when you previously exclaimed ‘why would anyone watch someone play a game!’

Whether it’s tips, tactics test, showing the development of wonderkids, or just playing through a save, there is so much great Football Manager content on the internet.

WorkTheSpace (Jack), Zealand, Doctor Benjy and Lollujo (Kev) are the standard bearers of Football Manager YouTube content, but the creators world is constantly growing and new faces are worthy of hitting that subscribe button.

Here are our Five Must Watch FM22 YouTube Channels, ready to take your knowledge and enjoyment to the next level.

Neil started uploading content during FM20 with his King of the North series, but it was during Football Manager 2021 with his positional explanations and ‘Get the Edge’ series where his videos moved to the next level.

During his Stingerman series, you weren’t just watching along with games, but every episode was an education. Making Stinger stand out from the crowd.

This week he announced his first FM22 save, taking on ACR Messina in Serie C, which is going to be great fun. He’ll sprinkle in some amazing tactical videos along the way, making him well worth your time.

Over 122 episodes, Steve documented his Pentagon journey in FM21, smashing through five continents to win all five Champions League trophies. It’s bold enough to take on this particular challenge on Football Manager, but to attempt it on camera is on another level.

Tactics tests showcased the best creations from members of the community. His guides on how to install badges, kits and other elements of the game proved essential. At the end of the cycle he took on the challenge of rebuilding a number of clubs who have fallen on harder times.

Steve has quickly picked up over 7000 subscribers and there’s no doubt he’ll quickly surpass over five digits come FM22.

During FM21, RDF has become the go-to creator when it comes to tactics and that is only going to continue once the new game comes out.

He doesn’t just load up a tactic and show you the results. You get the reasons behind it, the theory, how it should work and then examples in-game.

After upgrading his set up to involve a facecam, we now get to see the genius in action, plotting his tactics board to show you player movement, and it is testament to his ability to understand and explain the systems that has made him a must-watch creator.

His creations are not just limited to trying to break the game, but his recreations of tactics from past and present are superb.

It is very strange to see someone who has won TWO FM Streamer Showdowns with under 6000 subscribers.

He’ll bring you tactics, corner routines, wonderkids and one of the best produced Let’s Play series on YouTube.

Clatys is a story teller, but as a teacher, he makes his videos easy to understand and educational.

Somehow, Luke has only been posting FM videos on YouTube since Football Manager 2020, but now he is one of the most exciting creators out there.

Recently he has taken the jump and quit his FT job to make content his main source of income. It is a huge step, but it has only been made possible due to his amazing work and incredible rise.

With over 23000 subs, and fantastic production, there are few people making videos as good as Luke. Make sure to check out his rebuild series, featuring his Dad – something no one would ever have thought of. His wonderkid knowledge is on another level.

Tactics, tips and impossible challenges, it is a channel with something for everyone. Oh, did we mention he is a wrestler too!

I had to add myself as a bonus creator didn’t I? No, well, you get me anyway.

The pandemic pushed me back to the Football Manager world, and I never thought loading up FM20 would take me down a world of having a YouTube channel.

Inspired by people like Luke, RDF, Tookajobs and Tony Jameson, I started the Hexagono series. Don’t watch Episode 1, it’s awful, but you have to start somewhere.

Tactics tests have followed, I’ve jumped into little mini series and there is much more to come on FM22. You’ll see the videos uploaded to FMS, and I hope you enjoy them.