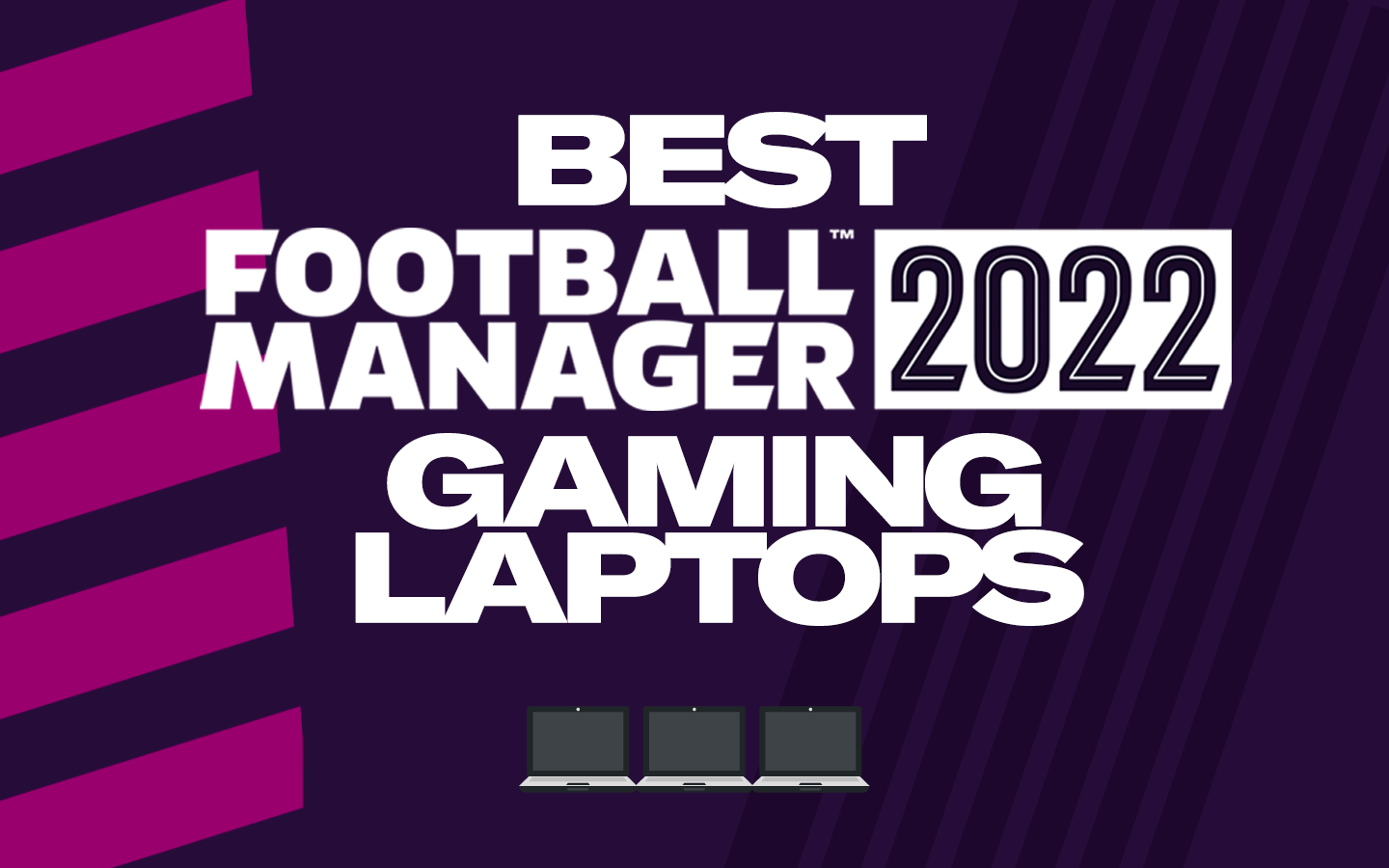 Are you looking to upgrade your gaming machine this winter? Maybe you have some Christmas money to spend. We’ve picked out the best gaming laptops for Football Manager 2022.

My laptop passed away this summer. My faithful companion since 2010 and, with a few updates like a solid state disk and more RAM it kept me playing through until FM21.

It has been more useful than my assistant manager, mostly because it didn’t keep telling me that we are being overrun in the midfield.

Now, it’s time to go scouting for a new gaming laptop to play FM22, so I’ve decided to share the results of my research with you and list the best gaming laptops for Football Manager 2022.

In fact, if you are old-school and still use the 2D interface while watching the matches, the graphics card becomes less relevant. However, the processor and the RAM memory are the most limiting factors for enjoying the gaming experience.

The minimum requirement to run FM22 is 4GB of RAM. With 8GB you are in a great position and 16GB would be great if you are planning on streaming or doing other activities with your laptop while playing.

It is important to know the kind of RAM memory you have and whether it can be expanded. Some motherboards come with an extra slot for another RAM and sometimes you can change the original if it’s not welded.

When searching for a new gaming laptop this extra capacity becomes relevant, allowing you to extend the useful life of your computer.

Nowadays I wouldn’t think to buy anything new if it doesn’t allow between 16 and 32 GB of RAM, but that depends on your budget and your willingness to change your laptop in a few years.

I firmly believe this is the most important component for a Football Manager gamer.

The game processes lots of information each time you hit continue: matches, transfers, and lots of other things.  Moreover, some processors come with an integrated graphics card. It’s not great if you want to run a very demanding game, but it will let you watch the matches with the 3D engine without problems.

An Intel i7 should be more than fine to process a save with more than 5 leagues loaded in Football Manager 22.

The graphic card manages the rendering of every 3D aspect of the game. In the case of FM 2022 it is not as important as other parts, but if you want to display the matches in the highest settings you’ll need a dedicated one. It is mandatory if you want to stream and edit videos in high quality, or it will make your job harder.

Most laptops have an integrated graphics card, mostly from Intel. It goes without saying that a dedicated graphics card will raise the price of the laptop, but it is a good investment if you play some other games there.

If you want a low budget laptop with an integrated card, you will still be able to enjoy the Football Manager experience for some years to come.

SSDs are much more expensive than HDDs, but in my opinion they are worth it. Keep in mind that the game requires at least 7 GB of storage and probably you will use another 2 or 3 GB to install graphics (badges, kits, facepacks, and many more). Nevertheless, having a SSD is not a crucial matter. It will make your game load faster but it is an important feature for the next years to come.

Which computer do I Choose?

And now let’s get to brass tacks.  I’ve found out that many options become overwhelming and often end up confusing the buyer. Therefore, I’ve listed no more than five laptops in each category to ease the decision making.

When choosing low budget computers, bear in mind that they have to at least comply with the minimum requirements listed below. In the other two categories, I’ve reduced the options by only selecting from those which have 4 stars or more in Amazon. The real feedback of a computer, and everything else, is what the users say about it and the Amazon rating system seems trustworthy.

Space in disk: 7 GB for the game and 1 or 2 GB for downloadable graphics.

This is a refurbished computer. It means it may have a scratch or something visual on the outside but it works as brand new.

This is a very good computer under £300. It also has 8 GB of ram but its processor is slightly worse than the Dell above. Its display is a little bit larger though, reaching 13.3 inches.

The problem in this case is the low capacity of storage, but it can be supplemented with an SSD or an TF Card up to 128 GB.

This is a better computer than the previous machine if you are willing to spend the extra money. A 14-inch display and a 256 GB SSD are more than comfortable. It also has 8 GB of RAM DDR4 and its processor is an Intel Celeron N5100.

Dell is famous for its solid computers. In this case, the low price is due to being a refurbished unit. However, it comes with an Intel i5 processor from the 6th generation, 8 GB of RAM and a SSD of 256 GB for storage. Moreover, its RAM is expandable up to 16 GB.

The HP option is just as good as the Dell. It also presents 8GB of RAM (upgradeable to 16GB) and 256GB of SSD. The processor is an Ultrabook Core i5 6200U which runs up to 2.8 GHz. Hard to find deals like this at these prices.

This HP computer has a dedicated graphics card, NVIDIA GeForce GTX 1660Ti which will allow you to play almost any game in top settings. For FM22 it is an overkill. It also has 8 GB of RAM and its solid state drive has 512 GB. Of course, the price is higher than those in the last category.

It is worth keeping an eye on this laptop, as it is regularly discounted. It is a solid laptop with an Intel Processor and a similar graphics card as the option above.  Its storage is smaller in comparison but the difference in price is as well.

It is a solid option, very similar to the Crawler E10. Its processor is different, coming from AMD, but the graphics card is the same.

Another laptop with the same graphics card. In this case, the Lenovo comes with an Intel Core i5 -9300HF processor. It also has 8 GB of RAM and a SSD with 256 GB of capacity.

The bright part of this computer is the OLED screen, which highlights from the others in this category.  It does not have a dedicated graphics card but it comes with 16 GB of Ram.

Best Gaming Laptops for FM22: Manchester City and PSG options (No limits on budget, over £1000)

Well, we are past the budget zone with this laptop. It has it all, especially a great graphics card. It has a AMD Ryzen 9 5900HS processor, a NVIDIA GeForce RTX 3080 graphics card, 16 GB of RAM and 1TB of SSD storage. My guess is you could play until FM 2035 with this computer.

This is another solid option. Its graphics card is slightly worse than the ASUS above, but it is still great.  It has 512 GB of storage and 16 GB of RAM. It will run Football Manager 2022 real smoothly.

In this category, this laptop qualifies as low budget. Nevertheless, it has similar specifications than the previous ones. The main difference is the frequency of the display, but on the bright side the display is larger.

I can imagine this is the kind of computer they use in NASA. Impressive storage, processor, graphics card, everything. However, in the era of cloud storage, its 3 TB (1 TB SSD and 2 TB HDD) seems like a lot.

We’ve given you the best gaming laptops for Football Manager 2022, but which one are you going to buy?