If you read the previous post you know that my Chester had an incredible first half of the season which brought us on the first place. I was hoping for a good second half and a promotion to League One, even if the media prediction at the start of the season was… 21st. In the January transfer window I couldn’t bring any important players, because my transfer funds were only a mere 1,500 euro. I brought some youngsters for the future on free transfers and another 2 players on loan from my parent club, Manchester United: central defender Craig Cathcart and versatile midfielder Tom Cleverley.

The first game in 2009 was the third round F.A. Cup match against Liverpool. We lost it 2-0 at Anfield Road after an entertaining game in which we had a couple of chances. The bad thing was that after this game both my main strikers, Almerares and Brajic, were injured.

That resulted into a string of matches in which we missed a lot of chances. The last one was away at Aldershot, an incredible defeat after a game that we controlled from start to finish.

But that couldn’t last… After that game we managed to record a string of 8 games without defeat, with 6 wins and 2 draws. We still were on the first place, with Port Vale a few points behind.

At the beginning of 2009 we also had the final of the Johnstone’s Trophy North, two legs against Leeds United, a League One team. We lost the first leg away 2-1. The second leg was a dramatic encounter: we led 2-0 but they managed to score in the 90th minute. The match went to penalties and we won! 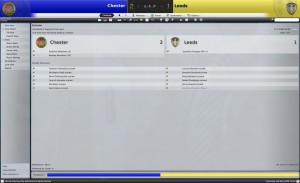 The winner of the South section was Southend, also a league one team. With a lot of players injured and tired from the league matches we lost the final 2-0. But we were doing quite well in League Two. With 10 games to go we were on the first place, with Port Vale 2 points behind us. And the next match was at home against… Port Vale. The game was a delight for me, my players simply gave them no chance: 3-1 and the promotion was closer than ever.

The good results made the media speculate that I wouldn’t sign a new deal with Chester at the end of the season (my contract was only for one year, so it was going to expire in June).

We were still on the top spot with six games to go, and we had secured a play-off place. But I was sure that we will obtain the direct promotion. And we did that with three games to play until the end of the championship. The fans, the board and the club icons were deliriously happy :)

I was happy too. The media were saying that I was the main candidate for the Peterborough manager job, in League One. The Chester board offered me a new three year contract for 98,000 euro per year. I accepted immediately :) We won League Two with 96 points and 100 goals scored! Great!

Check out the next post for some interesting stats from our incredible season!