The media said we would finish 21st, I didn’t know what to think. I signed 15 players, sold 10 and hoped for the best.

The first League Two game was a success, a 4-1 home victory against Gillingham. That game really made me believe that we were destined for more than a mid-table position. 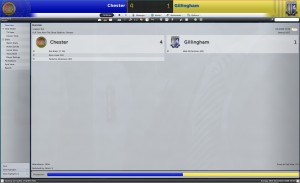 We were knocked out quickly from the Carling Cup, as we met Newcastle in the second round. We only lost 1-0 to them though :) 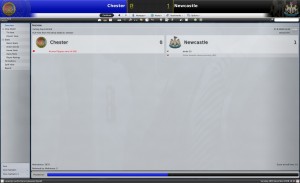 The seventh League Two game was something miraculous for Chester City: a 6-0 away win at Notts County! We were on the 3rd place! 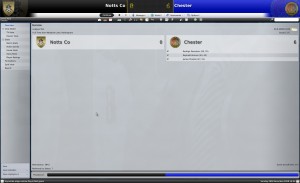 Right now we are on the 28th of December after 23 games in League Two and we are on the… top spot on the table! First place after 23 matches! Unbelievable!

Now let me introduce you the players that made this incredible achievement:

Daniel Rosza, Hungarian, 24 years old, bought him for 2,000 euro from the Hungarian second league. His average rating in 23 league games was 7.09. Not bad at all.

Karim Robin, French, 24 years old, signed him for free. He is left footed but I use him on the right side because I don’t have any better right backs… He played 22 league games, one assist, 7.09 average rating.

Nicolas Flegeau, French, 23 years old, signed him for free. The highest point in his career so far was a season in the French second league. But he did well for me. Played 21 league games, scored one goal, three assists, 2 Man Of The Match awards and an average rating of 7.06.

Krzysztof Strugarek, Polish, 21 years old, bought him for 10,000 euro from a small lower league Polish team. He definitely didn’t make me regret spending 10K on him. Played in all the 23 league matches, 6 assists and an average rating of 7.12. He can also play as a left back and he takes all the offensive set pieces on the right side of the pitch (he is left footed).

James Chester, 19 years old, loaned from my parent club, Manchester United. I hope to buy him at the end of the season. His stats are impressive: he played 22 league games, scored 8 goals (headers from corners and free kicks), 5 MoM awards and a staggering 7.34 average rating. He was a very important player for the team.

Mustapha Hadji, legendary Moroccan player, 37 years old, signed for free. He played 16 league games, scored 2 goals, 5 assists, 1 MoM award and had an average rating of 7.09. He gets tired pretty quickly, so he can’t play more than 45 – 60 minutes, but when he plays he really can make a difference.

Ignacio Benitez, 29 years old, Spanish, signed for free. He played in the Spanish La Liga for Recreativo a few years back. To be honest I expected more from him. He played 23 league games, scored 1 goal, 4 assists, 1 MoM award and an average rating of 6.94. I hope he’ll play better in the second half of the championship.

Sam Hewson, English, 20 years old, on loan from Manchester United. He played in all the 23 league games, scored 3 goals, 2 assists and an average rating of 6.92. He can do a lot more than this, I’m sure he’ll grow into a good player in a few years.

Rok Brajic, Slovenian, 23 years old, bought for 6,000 euro from a small team in the Slovenian second league. He played 16 league games, scored 5 goals, 4 assists, 1 MoM award and an average rating of 6.82. Quite injury prone and wasteful striker, but he’s good enough at this level.

Federico Almerares, Argentinian/Italian, 23 years old, bought for 4,000 euro from Basel. He grew up at River Plate and he is my star player :) He played 18 league games, scored 11 goals, 5 assists, 2 MoM awards and a 7.02 average rating. He is crucial for my team but unfortunately he spent 2 months injured. 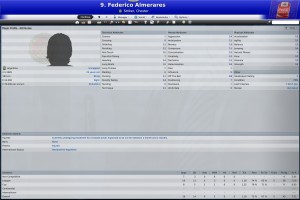 I told you that I was knocked out from the Carling Cup, but I’m still in the F.A. Cup and in the Johnstone’s Trophy. In the F.A. Cup I managed to get to the 3rd round, but my next match will be a chilling encounter against Liverpool on the Anfield Road stadium. I hope they will have mercy on our souls.

The Johnstone’s Tropy is a different story, the best teams here are those from League One. It’s divided into 2 sections, North and South, and our Chester City managed to get to the North final! We will meet Leeds United in the final game and if we win we will play the winner from the South section.

But the league is the most important. There are 23 games to go and if we want to get promoted directly we have to finish on one of the first three spots. Places 4 to 7 will qualify for the play-off. I really hope we will be able to keep up the pace and win promotion. I’ll be scouting for some bargain buys in January to strengthen the squad. Wish me luck ;)

And check out the next post to find out how the second half of the season went for my Chester!

Thanks for visiting Vitaliy! I hope we’ll keep in touch.

Recently, I started a new save unemployed, and finallly got a job at Charlton when they relegated to League 2.
Oh, almost forgot to say, it was at the end of seanson 12/13.

mate i dont know if this has anything to do with me being in america but on my morecambe file i cant find any of these except for chester and possebon. and i am playing with a large database